Working from Colombia in 2020

Working from Colombia during a Pandemic
After breaking out of “hermit mode” for seven months, I did a solo trip to Southeast Europe. When I got back, I couldn’t stand working from my basement office anymore, so I booked a flight to Colombia.

Digital Nomad is a term referring to those who are location independent. Due to worldwide lockdowns, this small community has grown considerably. I work from home 75% of the time, even pre-pandemic. However, I do not consider myself a Digital Nomad. 25% of my meetings are face-to-face in the region I live, and I have meetings throughout the day (during normal business hours), so I can’t exactly pack up and move to Croatia for the year.

What I can do is work from abroad for a month or two, here and there, while we see how the pandemic is going to play out. I took advantage of this situation a few times.

What follows is my personal experience in Colombia. It is what I shard with friends and family while down there. I hope to follow this up with a logistical post soon. 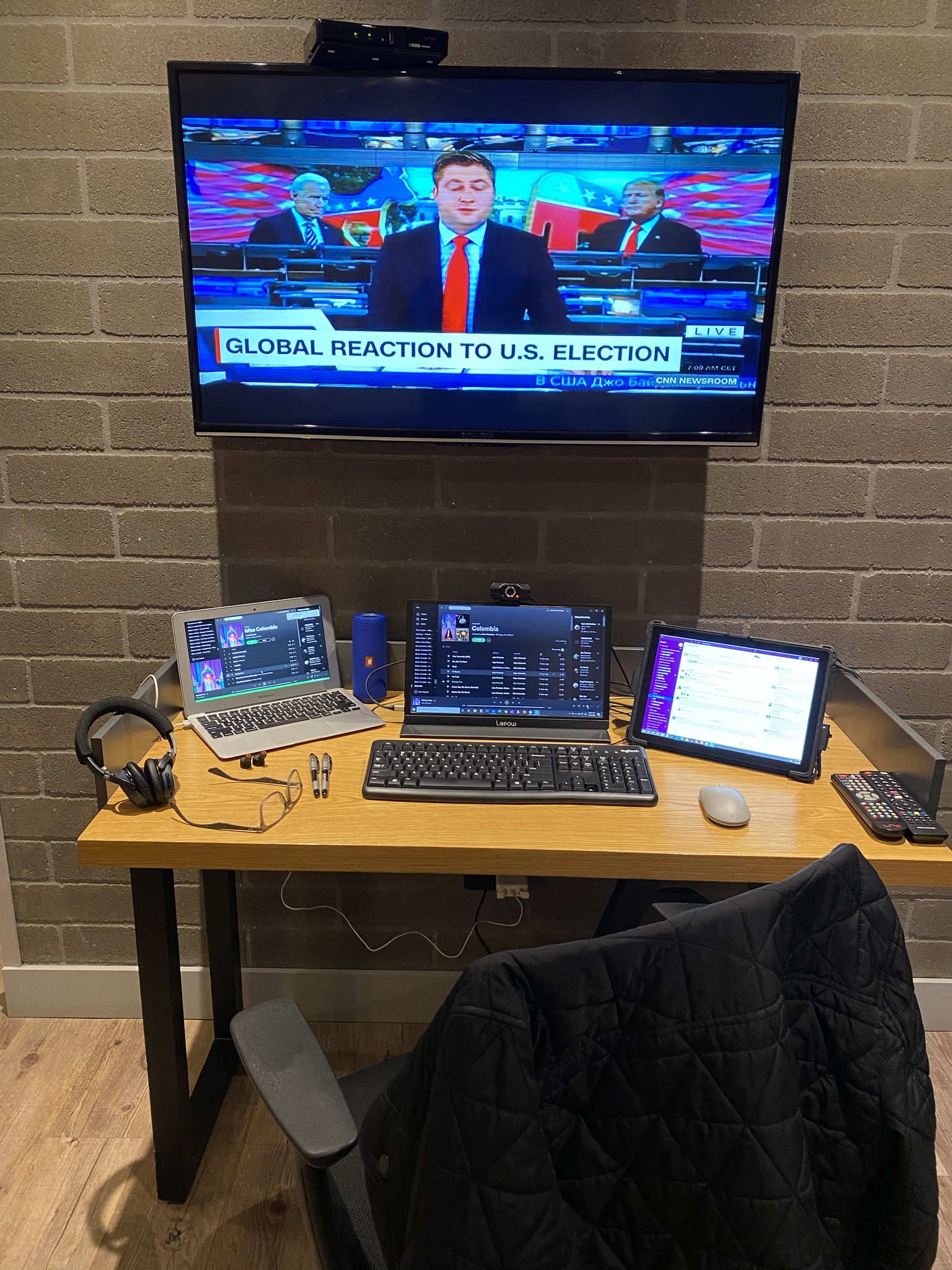 This will be my office in Medellín, Colombia for the next 18 days.

I have a friend living here, so I rented an apartment in his building in the nicest part of the city. 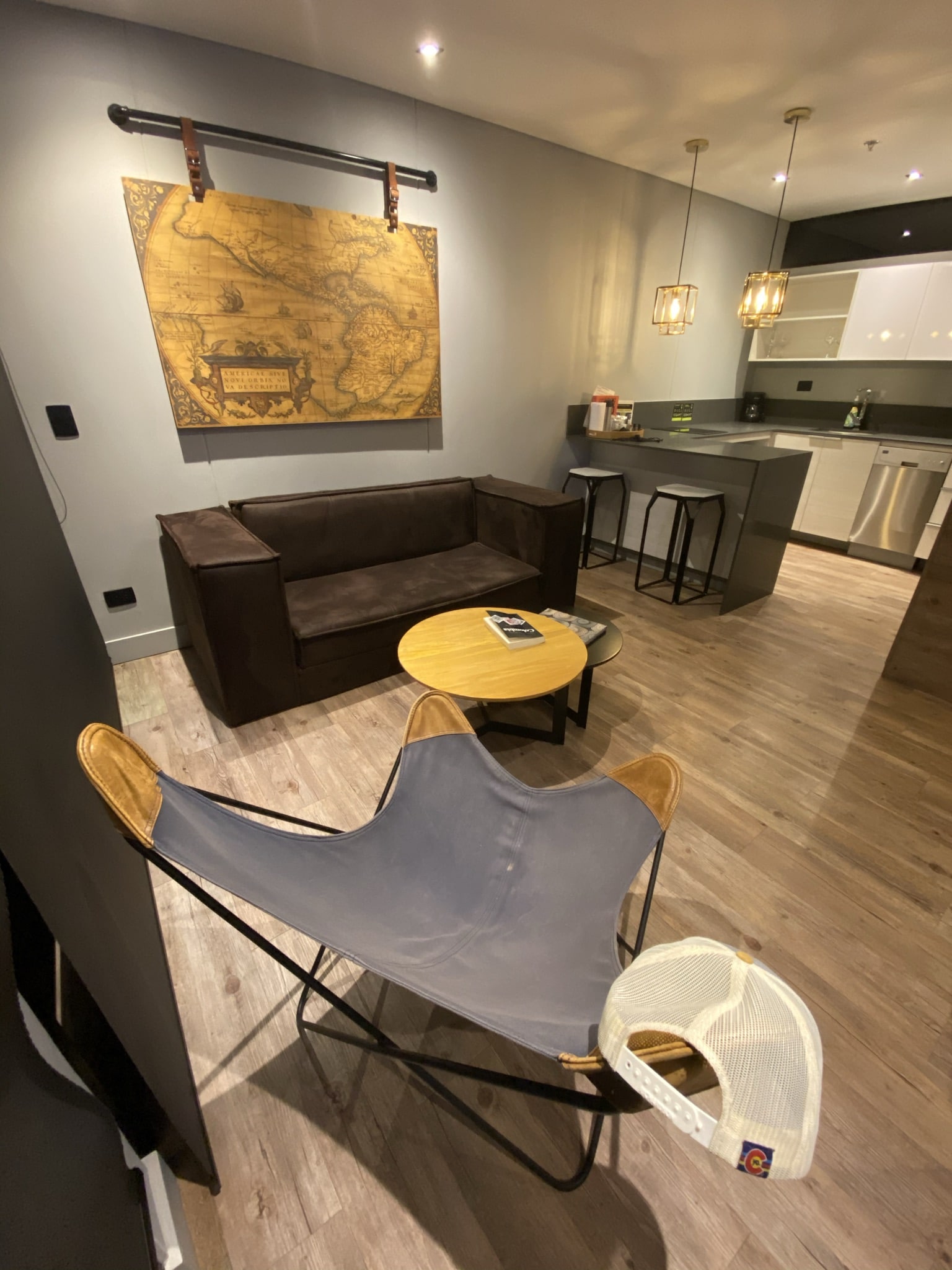 El Poblado, Medellín
I honestly don’t have a real feel for Medellin yet because I haven’t journeyed out of the affluent neighborhood I’m staying in.

I’ve only been here a few days and I’ve been working. Tomorrow that will change. Getting out for awhile in the morning.

They take COVID very seriously here. Masks everywhere. They sanitize your hands (and sometimes even your shoes) before you are allowed in anywhere.

My friend who lives here has been key in giving me a good understanding of the city though. We are literally next door neighbors in the same apartment complex. He’s made sure I’ve been eating well and have a good handle on El Pablodo.

This is a huge city and I’m looking forward to seeing more of it mañana.

I’m going to start Spanish lessons this week, because not speaking Spanish is something I’ve always kicked myself for and being here has reminded me why it’s something I need to do. English is just not common in Colombia. 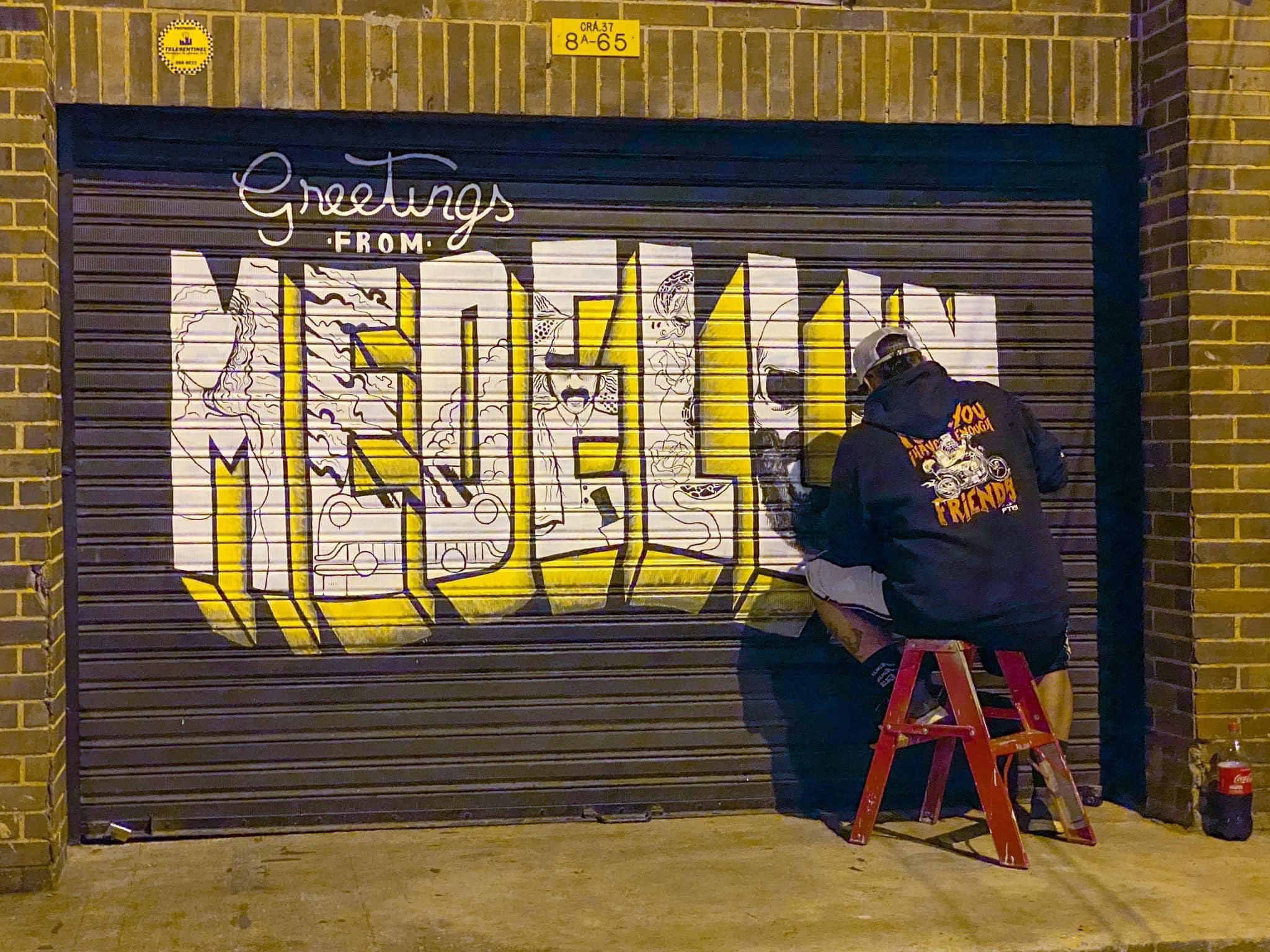 Medellín
Medellin has an incredible metro system. It includes trams, buses, and cable cars. These were the first cable cars ever to be used for everyday public transportation. Before they existed, the people who live in the comunas had to hike up and down the mountain every day.

The people here respect their public transportation. You could literally eat off the floor of the cable cars, if you were to eat in them. The locals don’t.

It’s crazy to see these modern looking pods hovering above these shanty towns, but it’s also pretty cool. I can’t say everything the government has done here has been in the interest of the people, but this was a huge gift and it changed lives for the better.
Comuna 13
Comuna 13 used to be the most dangerous neighborhood in Medellin.

The guerrillas were in full on war with the paramilitary in 2012.

Many innocent people were killed by bullets that would pierce their brick homes.

Today it’s a place of hope.

A lot of tour groups advertise a “graffiti tour”, but this isn’t graffiti. It’s street art. And it all has a message, meaning, and purpose.
Pablo

The jury is still out as to whether Pablo tourism is a good or bad thing for Medellin.

Colombia has done its best to erase this part of its dark past; repurposing his self-built prison as a elderly home, his ranch as a zoo, and the property where his family mansion stood as a memorial to victims of narcoterrorism.

My guide told me the story of how a group of guides fought the mayor for over a year to legitimize what they were doing. The argument against this type of tour had to do with narco tourism and glamorizing Pablo’s reign. The argument for it was based on a history that cannot be buried or ignored…and to teach, in order not to repeat.

I lean toward the latter, but I understand the wounds are still fresh.

Outside of a few select barrios, Pablo is remembered as a terrorist.

My guide did not glamorize him. He talked about the good Pablo did for some people, but never shied away from the violence and damage that will take generations to recover from.

One interesting thing I learned is that a lot of people don’t believe he was killed by the police. There are multiple theories, but the one that seems to stick is that he killed himself to avoid extradition to the US.

It doesn’t really matter how he met his end though. He died on that roof that day in 1993, but he was just a man, and the violence continued for many years after.Pab

Envigado
I was going to take a quick walk and grab some tacos last night. I was exhausted and was going to call it early. My friend decided to join me and suggested we walk 3 1/2 miles to Envigado to get empanadas and beers instead. I hated him a little about 3 miles in, but it ended up being a great experience.

Having an apartment in the wealthy part of the city and having visited the poorest part of the city, it was great to hang out in a normal Colombian neighborhood. Envigado is technically another city (municipality) but Medellin flows right into it. They are both part of a large metro area within the valley.

We met up with my friend’s buddy who has lived in the area since 2014. We drank beers on the street until about midnight. Lots of stories about what it’s like to be an American living in Colombia.

I only took a couple pictures while out there. It just felt weird to take pictures of people out living their lives, so I snapped a couple shots of the Christmas decorations.

I just finished up work for the week and am off to Cartagena for the weekend. I’ll come back to the apartment Sunday night.

Alcohol sales are prohibited for the weekend starting tomorrow because Monday is a holiday and they don’t want large groups of people partying and spreading the virus. 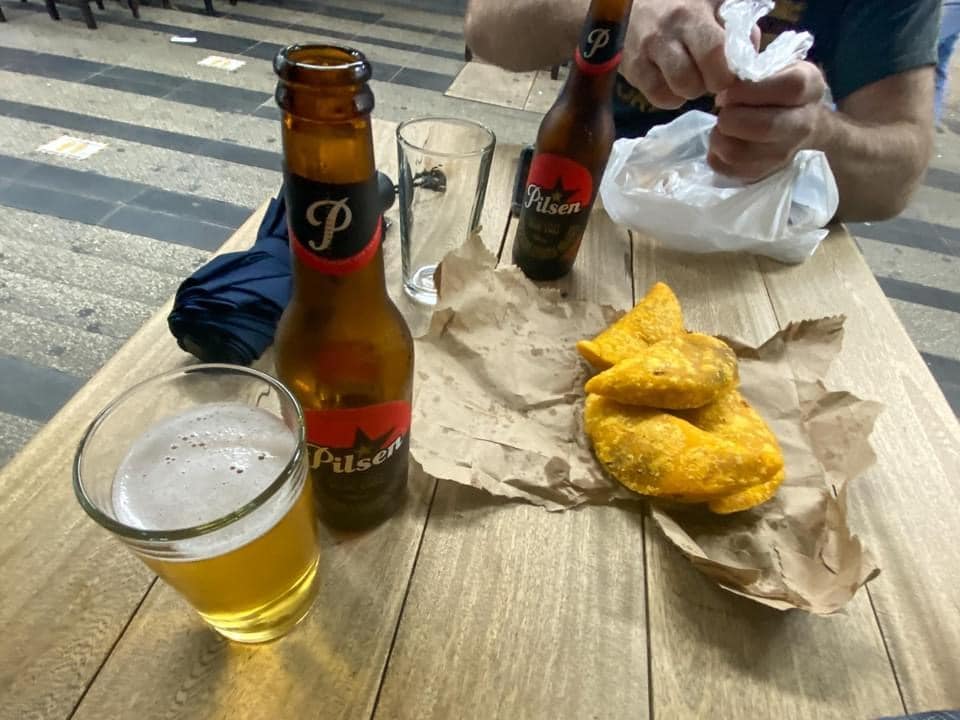 Cartagena
Cartagena is all about the sea, the walled old town, food, and nightlife. I picked the wrong weekend to be here.
Going out on a boat, or doing anything around the water, was not an option. The rains and winds from Iota made the sea much too dangerous. Really hoping that storm calms down and doesn’t hit an already devastated Nicaragua and Honduras. Those people need some good luck.

I stayed in a very cool boutique in the old town and was able to explore the streets, with wet shoes and umbrella in hand, but it was very quiet during the day and some parts were flooded. The barrios outside of town are under a state of emergency.

The food was amazing.

I was connected with a El Salvadoran who has lived here for years. He had recently connected with a girl from L.A. and they took me for some of the best sushi I’ve ever had the first night and for grilled steak and seafood, with live music, the second night.

As for nightlife, it did exist on Friday night. Lines of impossibly curvy girls wrapped around the street to get into clubs, even though dancing isn’t allowed and social distancing is in place. We found a nice rooftop with good cocktails and a dj when the rain took a break.

Saturday night was a dry night. Alcohol prohibition was in place to avoid mass gatherings and mass spread over the holiday weekend. We were able to get around it a bit though, so I got to enjoy a couple beers while watching the band play.

It wasn’t the ideal weekend I had imagined, but I’m still glad I came. I can see how this place would be great under different circumstances. It is very different than Medellin. It feels like a “vacation” spot. That said, I’m looking forward to getting back to my apartment.

Homemade traditional Ajiaco Bogotano tonight, made for us by a local friend of a friend who knows what she’s doing. 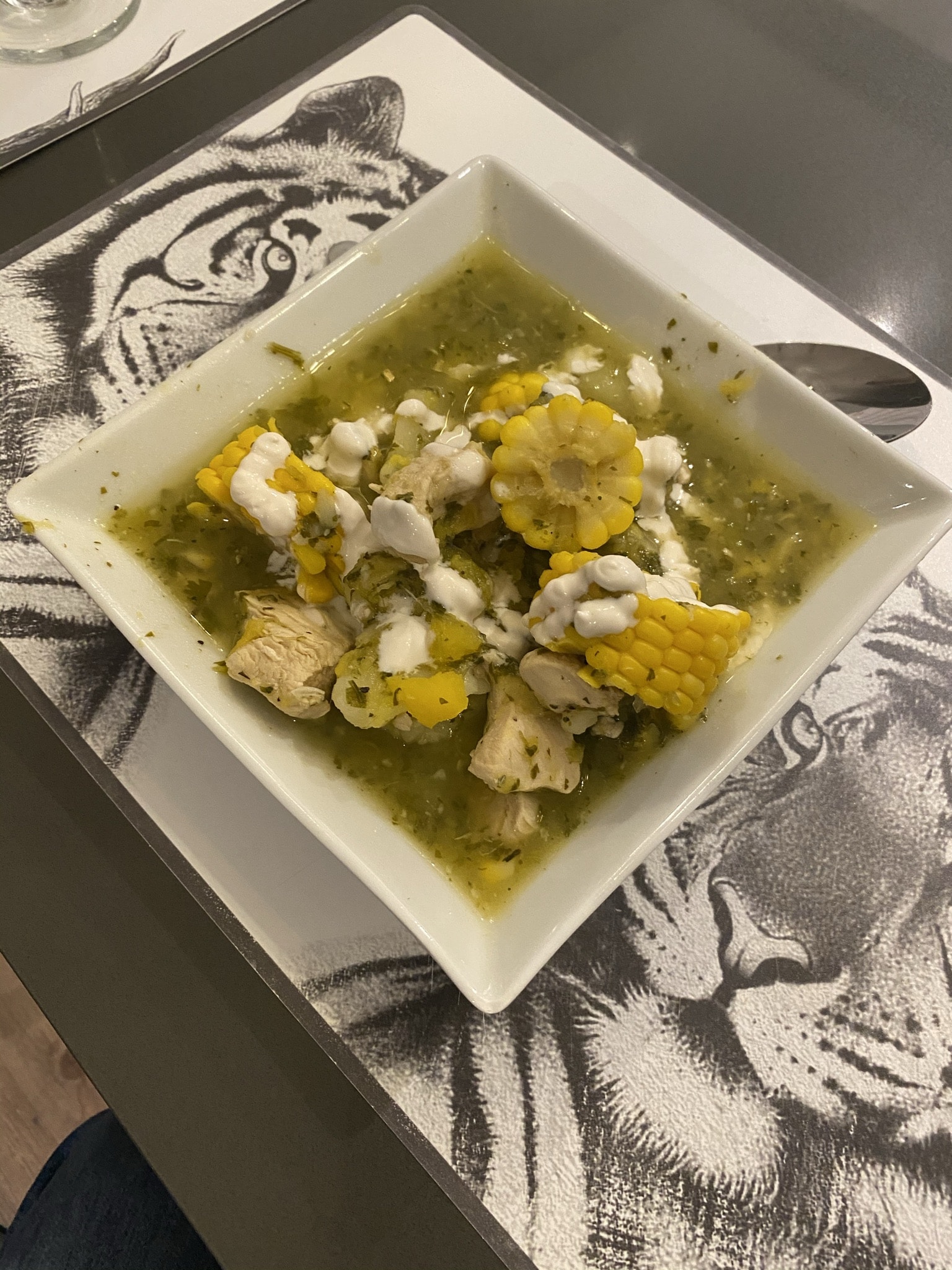 I found this pretty insect in my hallway today. I showed this photo to the girl who made us dinner. She didn’t speak English, but the translation was “it will piss on you and it will burn like a candle.” I’m glad I caught it and showed it the door before it had the chance. 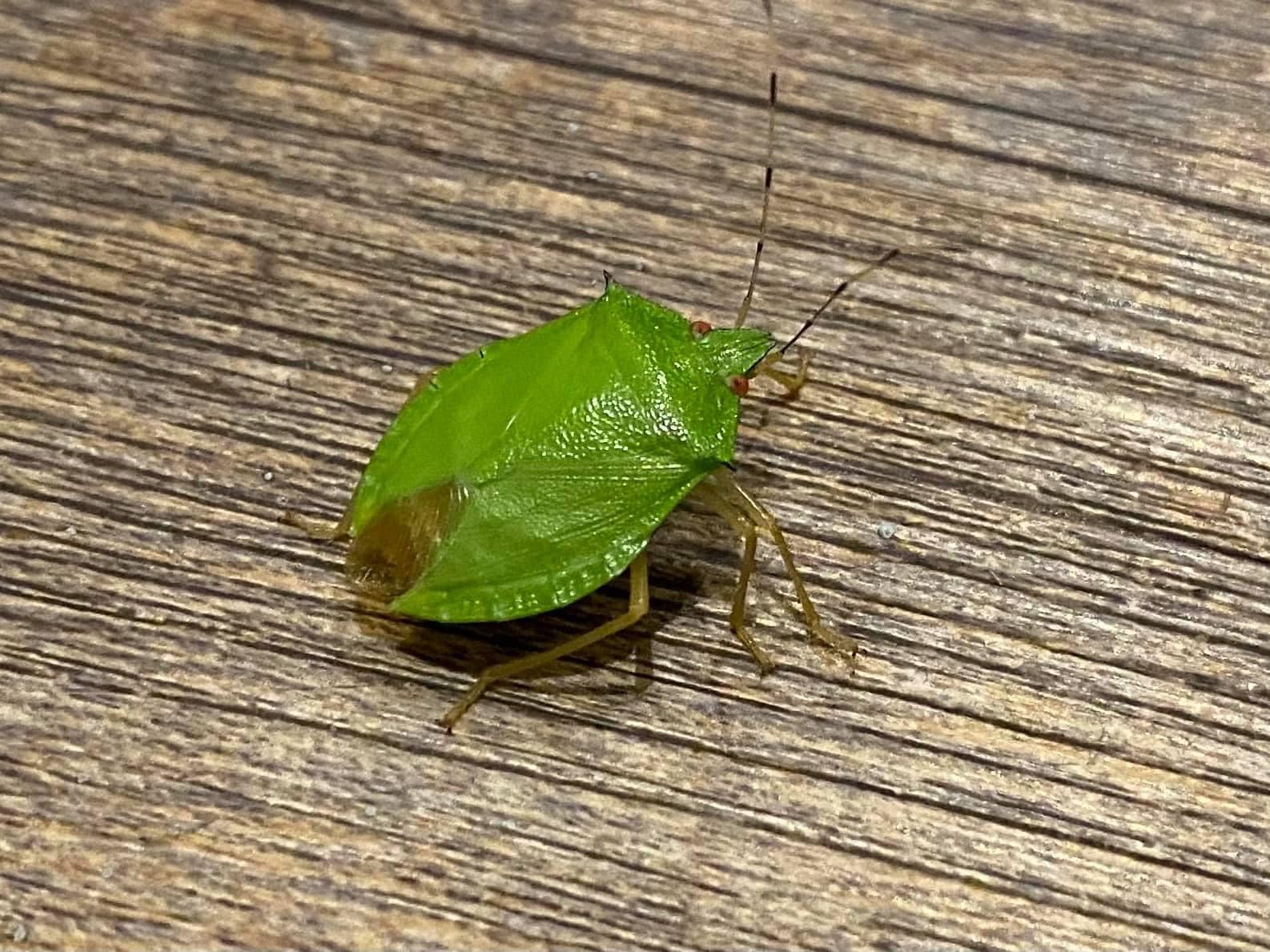 Medellín
The obligatory walking tour of the central district.

One of the best in South America.
Tejo / Sabaneta
We had the Anthony Bourdain experience tonight. Tejo (bowling meets cornhorn, but with mud and explosives) in Envigado, with 83 cent beers.

Then street food (fried intestines, blood sausage, and other stuff I can’t explain) in Sabaneta.

Fun night out. Now it’s time for Spanish homework.
Jardín
Jardín is a town in coffee country where I spent the weekend.

There were a surprising number of tourists there. They were all local tourists though; mostly from Medellin.

I didn’t do much.

It was a great spot to relax. I just hung out, finished Gabriel García Márquez’s “100 Years of Solitude” (highly recommend), rode a cable car that looked like a porta potty, and did some hiking in the country around town.
Cueva del Esplendor
I hiked to a cave in the jungle today.

The cave had a hole in it. There was a waterfall in the hole.
Guatapé
Climbed a rock this morning, in a touristy town with no tourists.

Was back in time for work.

Tested, packed up and ready to meet my family in Costa Rica. 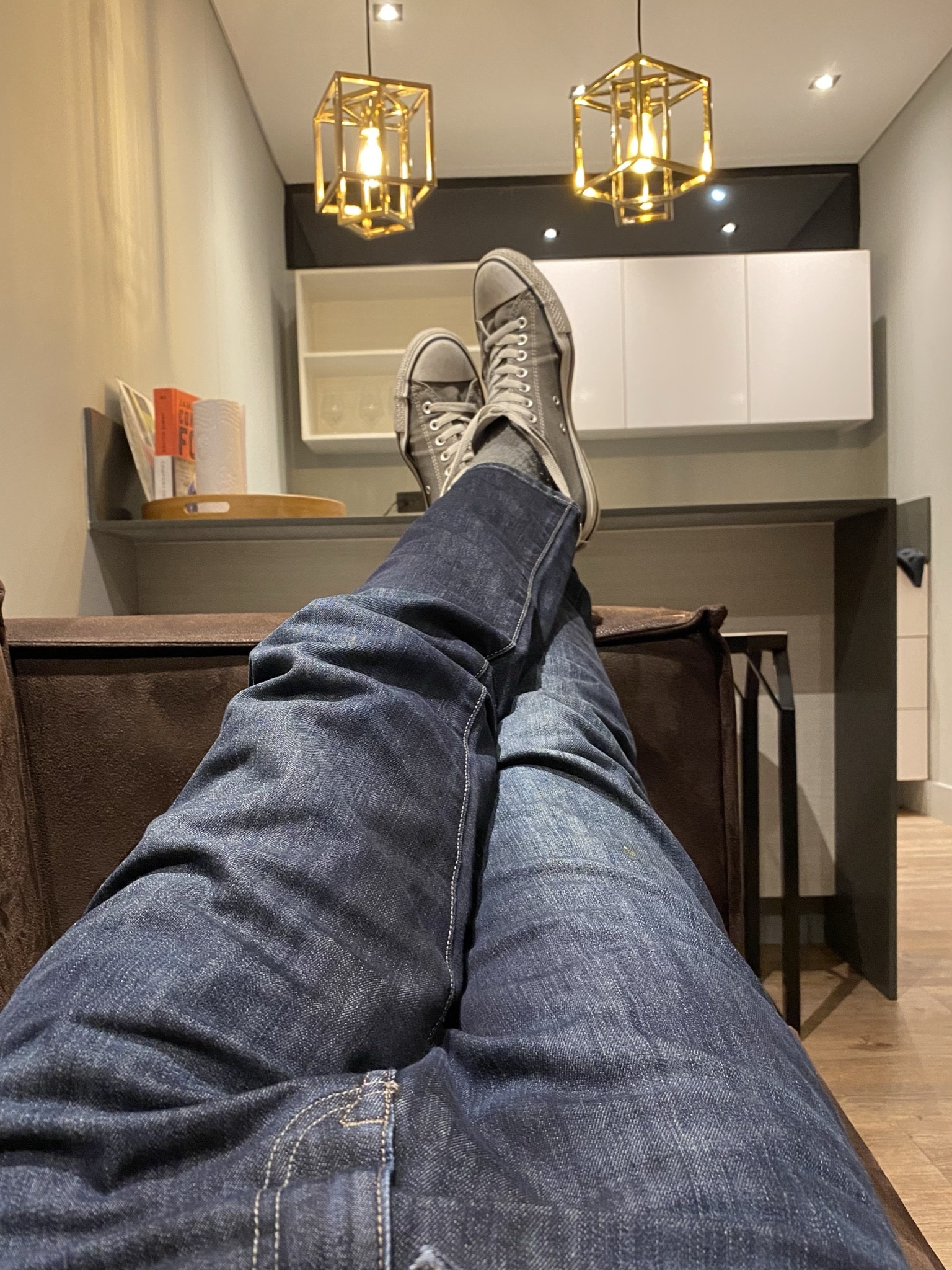 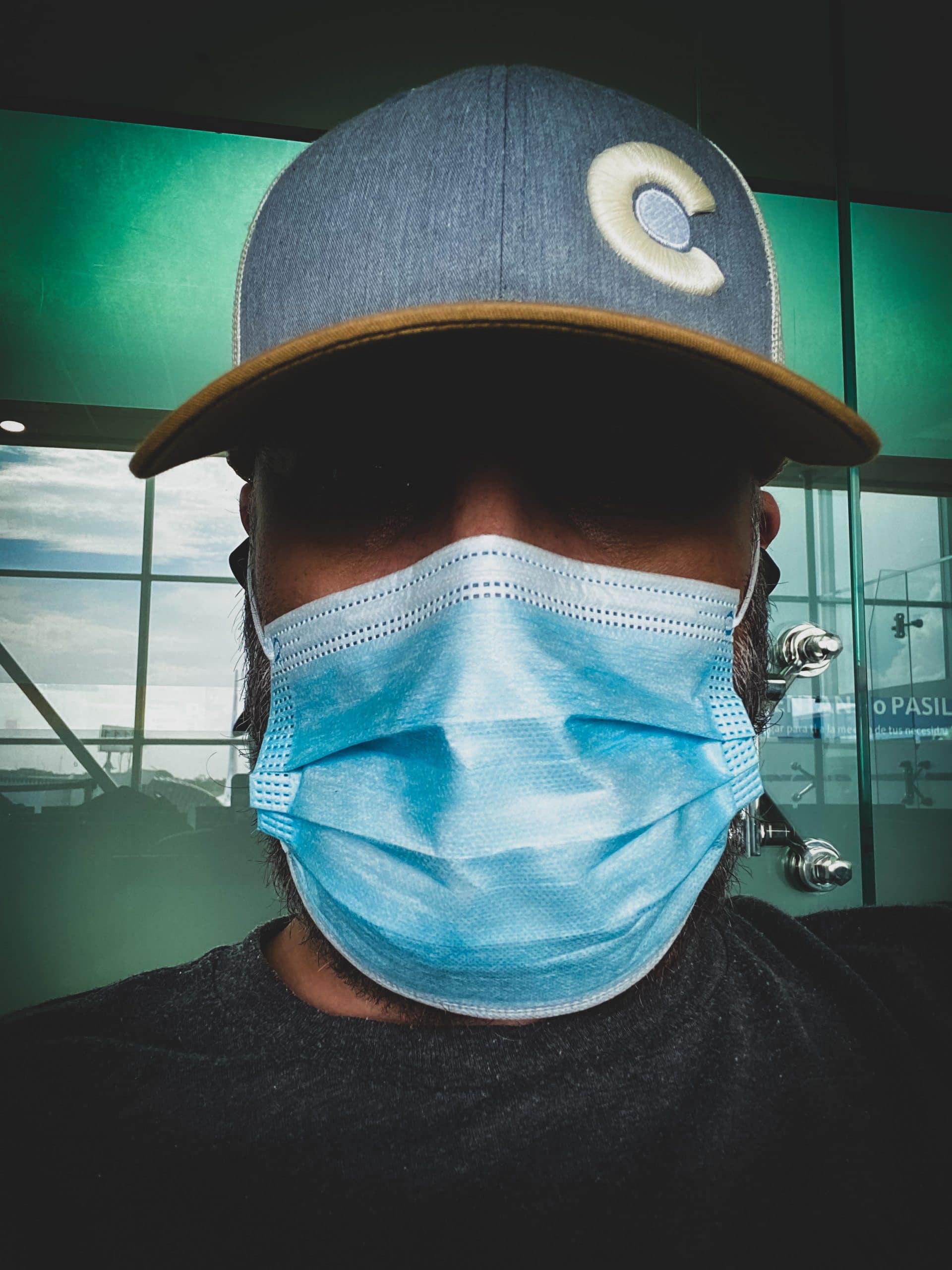