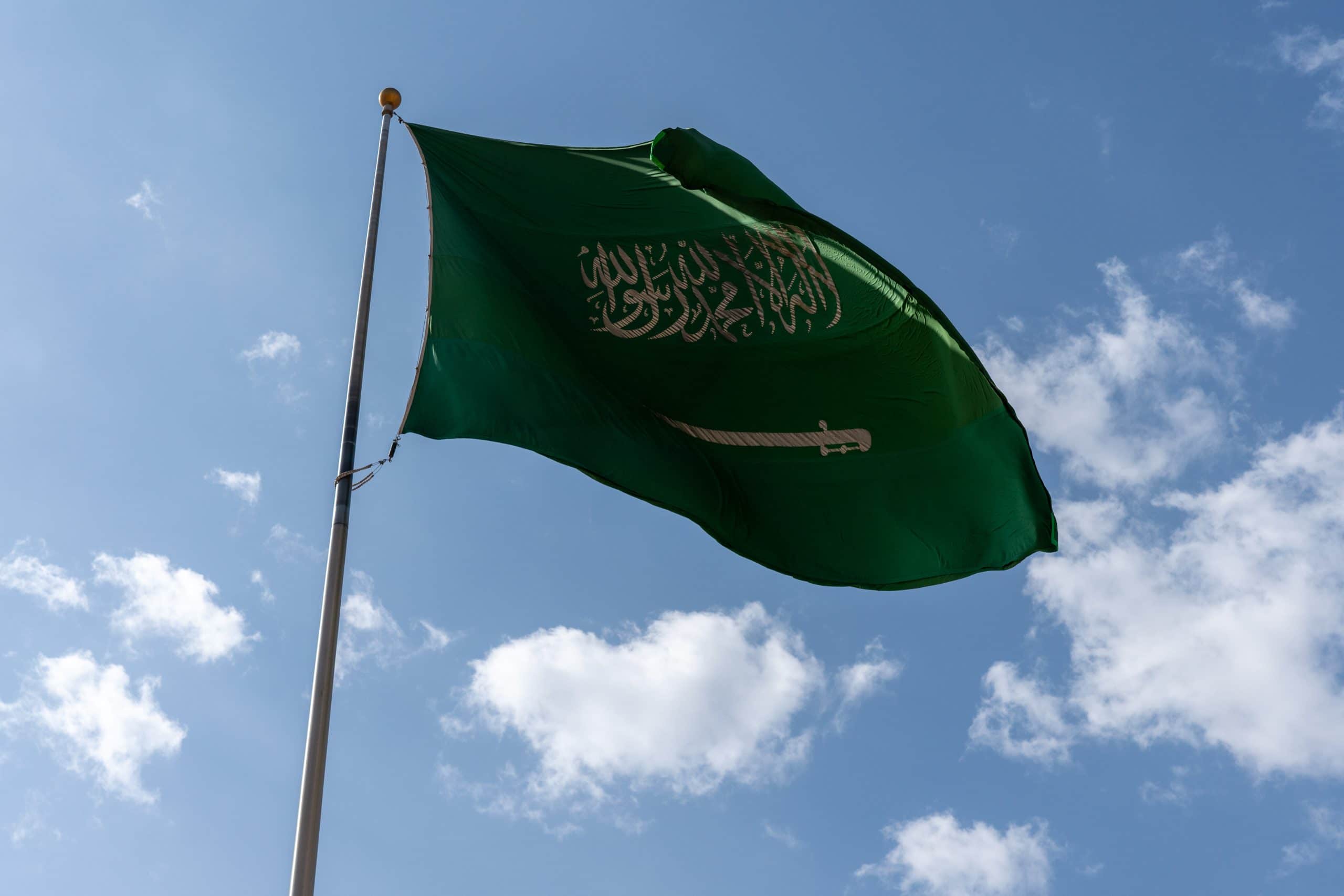 This is a personal travel blog. A travel guide for Saudi Arabia in 2022 can be found here.

ARRIVAL
Bureaucracy, Hospitality, and Sand: Traveling in a Newly “Open” Absolute Monarchy During a Pandemic
I arrived at night.
The runway was wet, and everything hid behind an orange glow from the blurred window of the A330 aircraft as we taxied in. I was coming in blind with no real expectations.
A delayed overseas flight, a near miss connection in Germany, 20+ hours behind a mask, a couple hours sleep, and a stack of documentation in hand (the visa being the simplest to receive and understand), I was taken aback by the bright light of the intricately designed Terminal 1 at King Khalid International Airport; complete with a large fountain, arching ceilings, and men in white and women in black guiding us to the correct line for processing. Residents this way, business visitors that way, tourists come with us.
Situated less than an hour north of Riyadh, the capital of The Kingdom of Saudi Arabia, RUH is one of the entry points for tourists who are not only now allowed, but “invited” to enter the historically sealed off and secretive Kingdom.
After some photos and fingerprinting, I was in an Uber heading to my hotel near the old town.
The easy part was done. 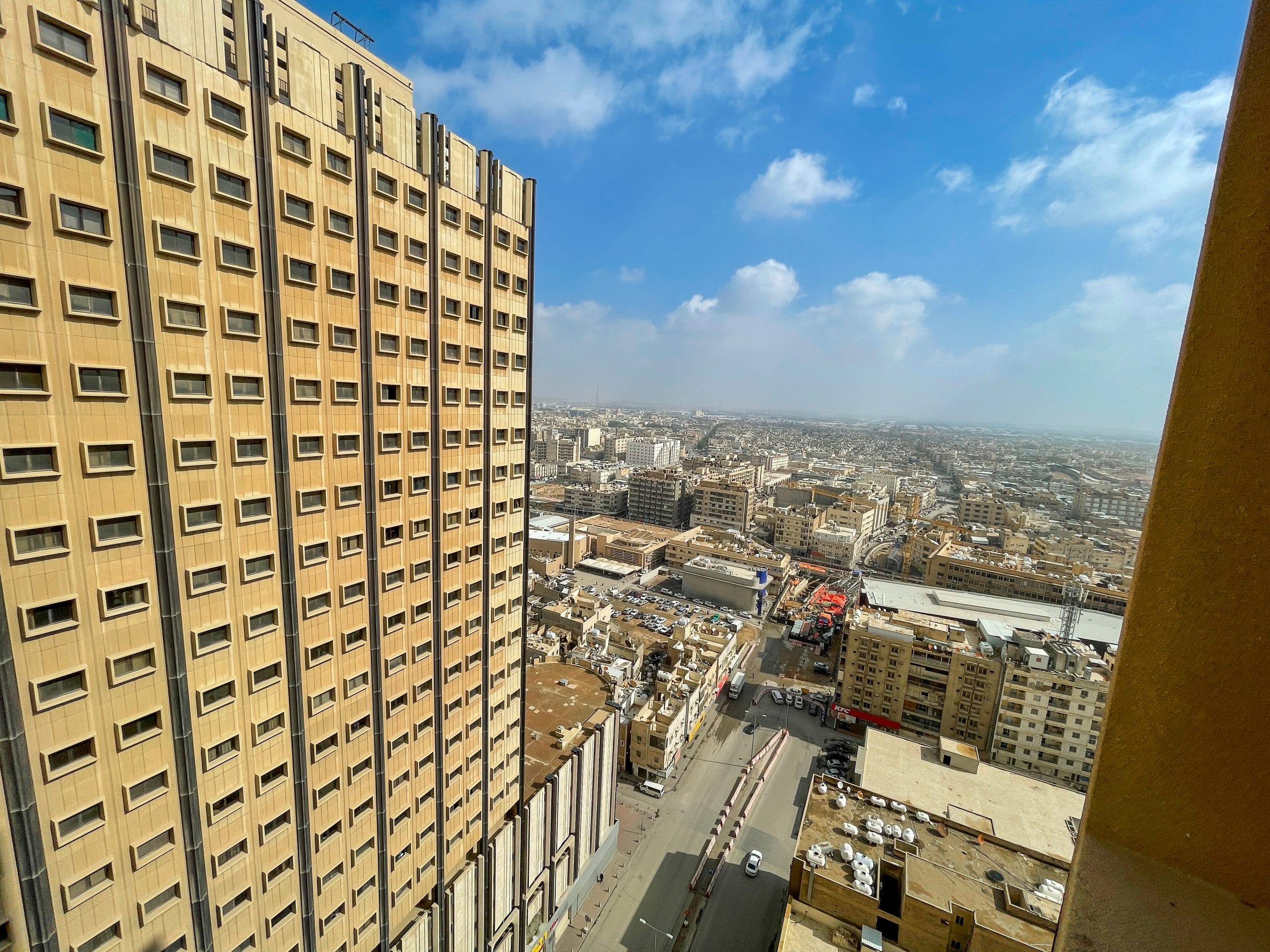 TAWAKKALNA HELL
Saudi Arabia has been one of the least friendly countries when it comes to tourism, but a new evisa program, introduced a few years ago and then put on pause due to COVID, allows multiple entry for a year and can be obtained online in less than 15 minutes. The caveat is you need to fill out a lot of COVID-related forms. The information in those forms feeds into an app called Tawakkalna. The app provides a barcode to be shown whenever entering a building or site in the Kingdom. If it’s green, you’re good. Mine was purple.
According to Tawakkalna, I was supposed to quarantine for 5 days and take 2 PCR tests. Evidently, another department called Muqeem did not register my vax info with the app. This is where the problems started.
The Tawakkalna people told me to call Muqeem. The Muqeem people told me to call the Ministry of Health. I called the MoH and listened to their anti-smoking message for an hour. The Ministry of Health told me to register with Absher. The Absher app told me I had to find a kiosk to register myself. But wasn’t I supposed to stay in the hotel? “Oh yeah, better call the Ministry of Health then.”
I went in circles for a good 24 hours. I was so close to leaving the country. I hadn’t slept worth a shit and wanted an alcoholic drink and was done with the Kingdom. I had only been there a day. 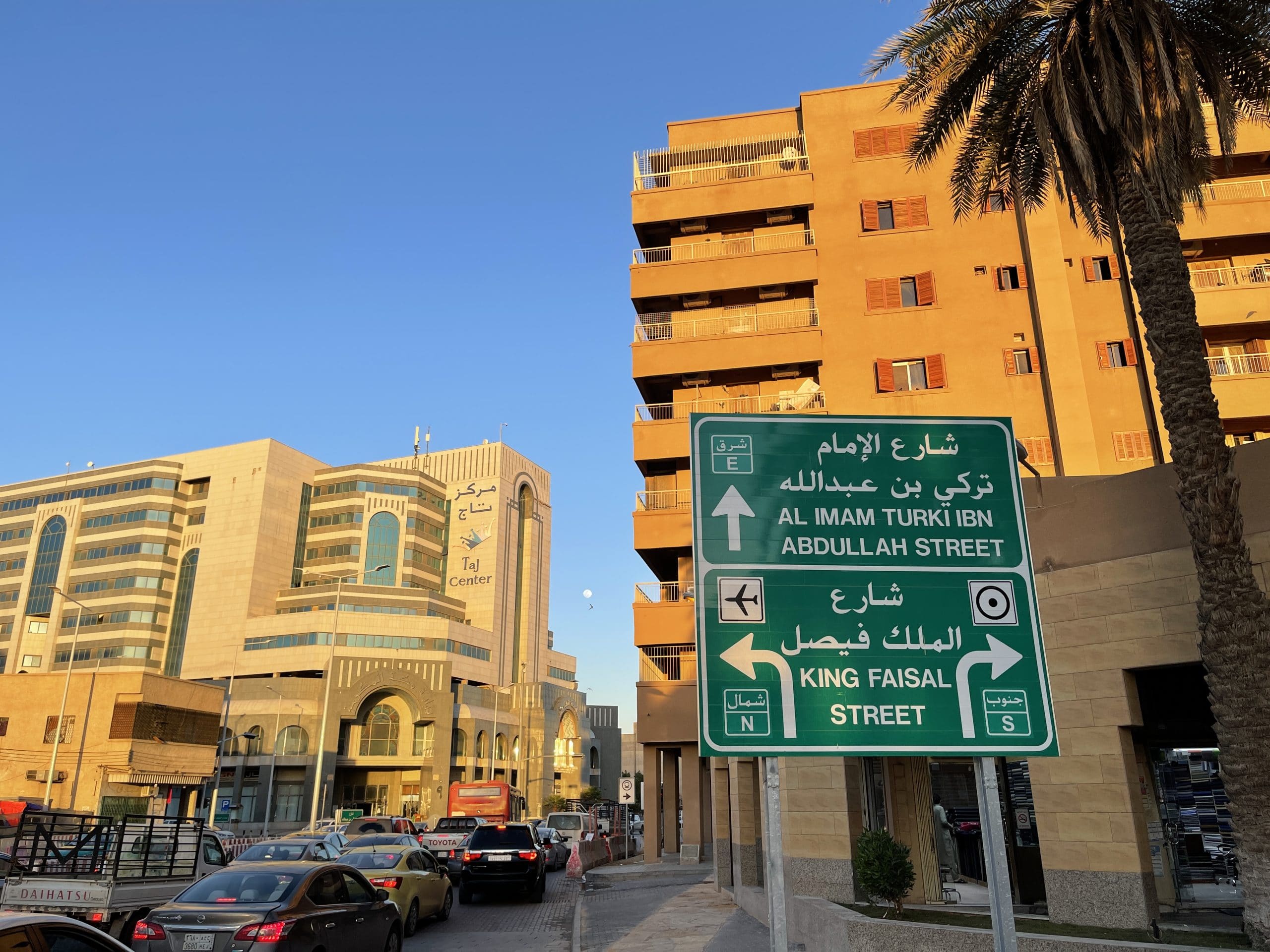 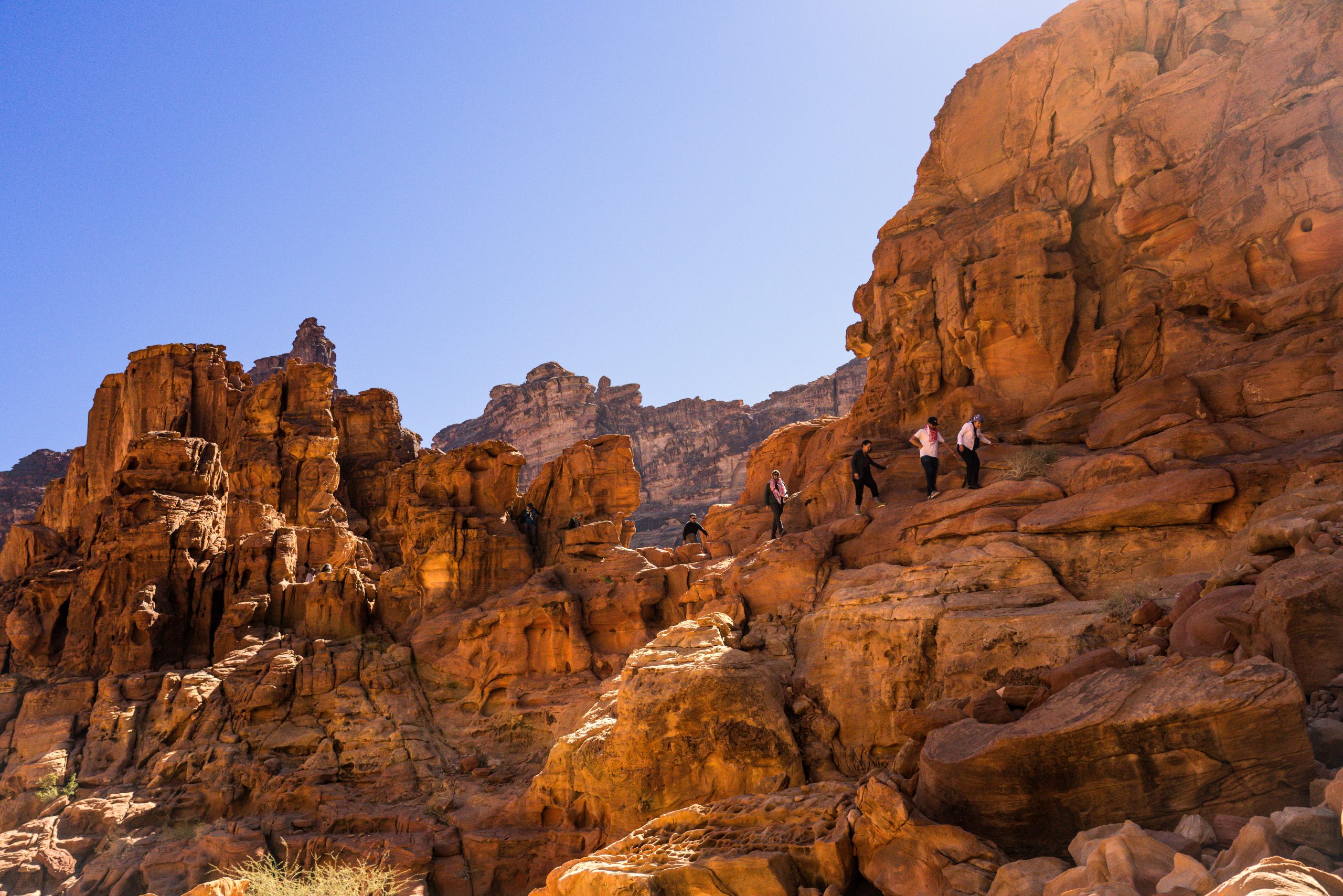 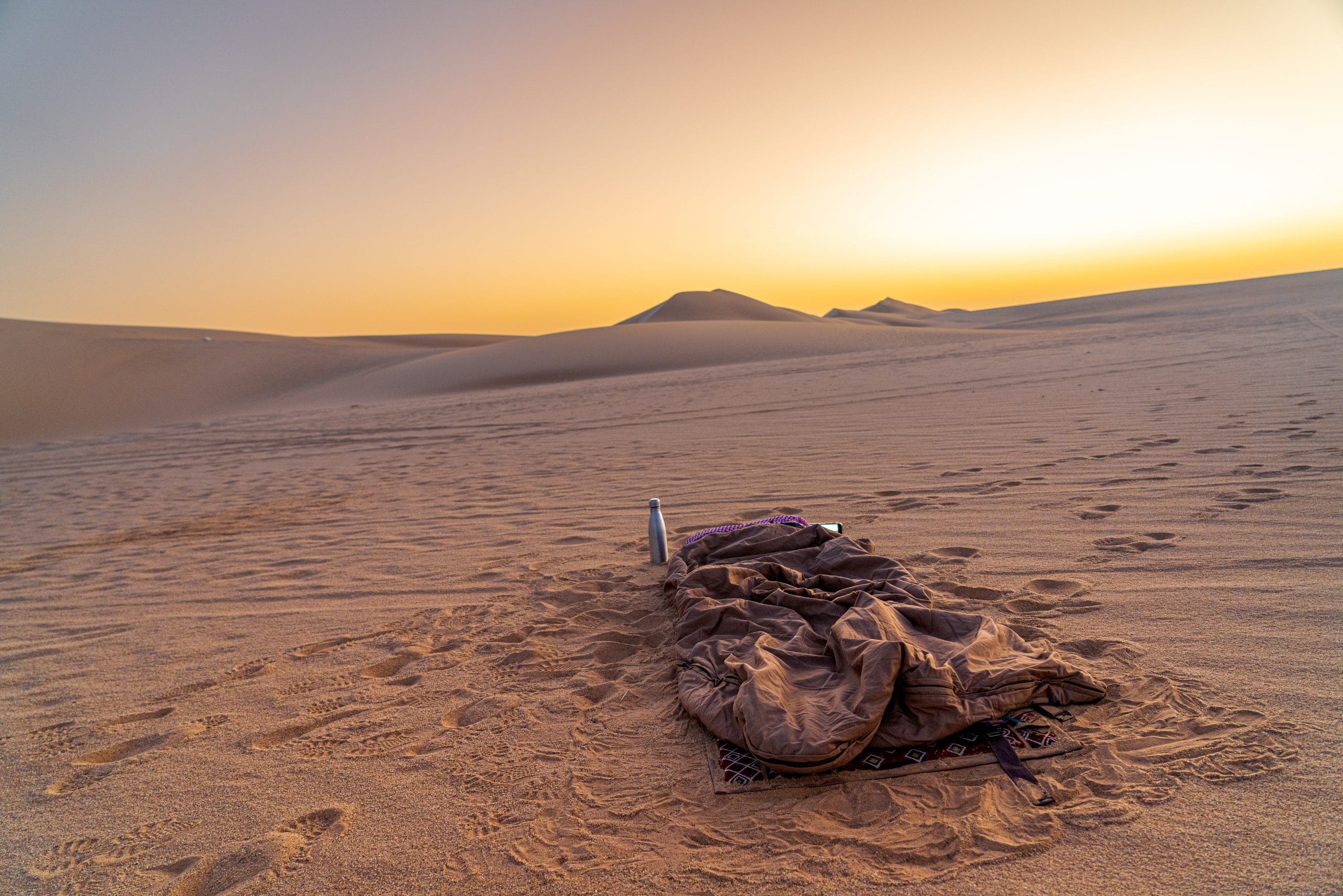 WADI AL-DAWASIR
Flying into Wadi Al-Dawasir was bizarre. Nothing but desert and circle crops growing clover for the camels. Meteb picked me up from the tiny airport. We loaded into a couple Land Cruisers and took off into the night.
Meteb runs these trips every weekend from November through February. It’s too hot in the summer.
We drove about an hour out of town and then pulled off the road and started racing into the darkness. I have no clue how he knew where he was going. Visibility was zero.
After stopping to deflate the tires, we continued through the nothingness until we saw a small circle of lights. It was our campsite for the night. The driver with the supply truck had arrived and setup camp earlier.
Coming out to the Empty Quarter alone (or with anyone who doesn’t spend half their life out there) would be suicide. Meteb and his crew have tricked-out Land Cruisers with a huge supply of water (via a facet near the rear tires), winches, air compressors, satellite phones, and a thousand liters of fuel. They don’t use GPS though. They have it if they get in trouble, but they like to hone their skills with manual navigation. There is no cell service out there, so they use walkie talkies to communicate between vehicles.
We sat around the fire and had an excellent chicken stew while Meteb briefed us on our rough itinerary.
There was no way of knowing what our surroundings were that night because it was too dark. We were offered tents, but I decided to sleep outside. There was only a sliver of a moon and billions of stars. They were above me and on both sides of me to the horizon. I slept in my down jacket, a mask (for the sand), and a beanie. I wasn’t cold, but a little uncomfortable on the hard sand.
I learned the next day, when I got up with the sun and had some zaatar and tea for breakfast, that we hadn’t even entered the Empty Quarter yet. We were right on the edge.
RUB’ AL KHALI
It seemed like we were driving aimlessly around The Empty Quarter. The terrain was an optical illusion. We’d be speeding at 140km an hour on what looked like flat terrain and all the sudden the vehicle ahead or behind us would disappear, and then we’d be climbing and sliding down a giant dune. It was like skiing with bad goggles, with no depth perception. I was expecting an adventure, but I wasn’t expecting a full two days of adrenaline rush. No photos or video can show what it was like. A lot of it was like being on a boat on the sea, rather than a Land Cruiser on the sand.
I say it seemed like we were aimless because that was an illusion as well. Dropping pins in Maps.me along the way showed we were traveling on a defined path all the way back toward Riyadh, but you would have never known it. Meteb and his guys are seriously master navigators.
There was no visible difference between hard and soft sand. We got stuck a few times, but Meteb was always able to get us out with some maneuvering and a little patience. The supply truck got stuck once. That was the only time they had to use the winch.
We had lunch in a small area with some poisonous greenery and some shade, we stopped and picked up some wood for the fire that night, then we found a random place to watch the sunset and set up camp.
The locals told stories around the campfire. One thing I never knew is that the British are responsible for Arabs from different countries wearing different colored scarves. The British couldn’t tell them apart, so they sold red ones cheap to the Saudis, green ones cheap to the Iraqis, and black ones cheap to the Palestinians.
I set up a tent that night and finally finished The Qur’an, but I moved back outside before going to sleep. I woke up in the middle of the night thinking there was something in my tent (I was sleeping next to it). I was completely freaked out until it started to blow away. It was just the wind.
MIRAGE
The next day was more fun in the sand, then we hit a dry lakebed that was 10 times the size of Riyadh. It had been dry for around 12,000 years. I spread some of my dad’s ashes there and collected a few rocks for my daughter.
They encouraged us to collect rocks. That is sure to change once tourists start flooding the place.
We saw some sand fish (I don’t know what they are really called), but no matter how hard Meteb tried, they refused to bury themselves with vibrations like they are known to do.
DEPARTURE
Our last stop was at a water well used by the Bedouins. There was a small pool that some people swam in, but it was freezing so I passed. We had a nice lunch there and then drove to the exit of the Empty Quarter (via Layla) and back to service and civilization.
We only scratched the surface of the Rub’ al Khali, but it was the most remote place I’ve ever been.
We dropped the others off in the Diplomatic Quarter, then Meteb took me back to the hotel, where I used a conference room to change and wipe myself down with shower sheets, then I went to the airport and started the 24-hour journey home.
I didn’t get rid of all the sand until I was in Colorado the next day.

This site uses Akismet to reduce spam. Learn how your comment data is processed.